Buster: Just Trying To Get Someone to Listen

Buster: Just Trying To Get Someone to Listen 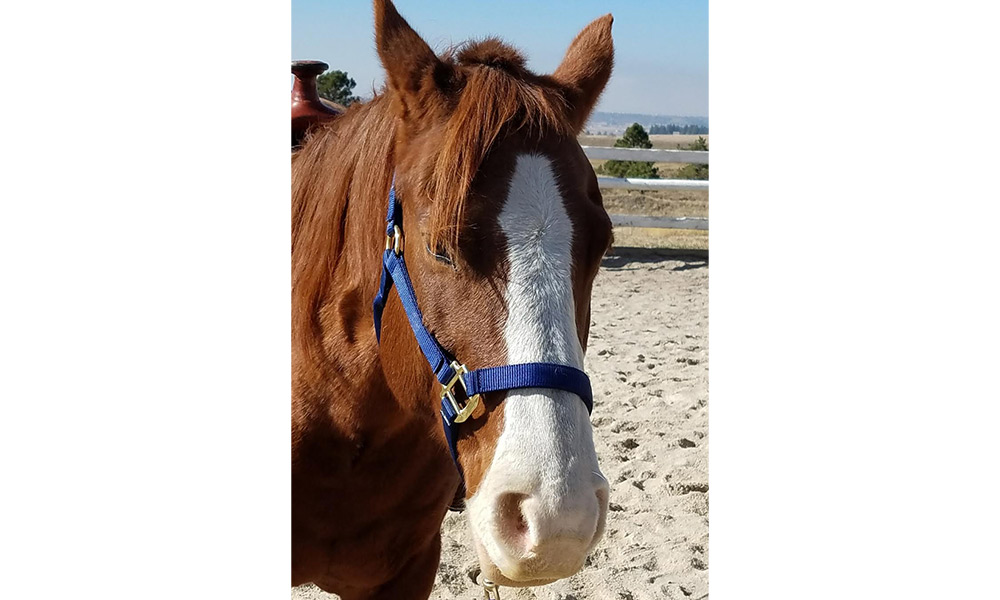 There are few things that are more frustrating than trying to get a message across to someone who isn’t listening. If the message is that something really hurts and no one listens it’s even worse. What would you, as a person, do? Talk louder, try to get the person to pay attention and maybe even yell? Animals are often faced with that kind of situation and for them, “yelling” may take the form of behavior that can be dangerous to humans.

Buster is an adorable quarter horse pony that was saved from the kill pens at a horse auction in a western state in 2015 by staff from an equine rescue. He was emaciated and needed 3 months of rehabilitation before he became healthy enough to be adopted. Buster was adopted by a family as a children’s riding horse, but after only 6 months, he was returned to the rescue because he had started bucking under saddle.

The rescue worked with Buster for 6 weeks and he received chiropractic treatments. The rescue staff felt he’d gotten past the bucking behavior and Buster was adopted by a second family. The family was fully informed about Buster’s bucking behavior and his need for chiropractic care. Buster was ridden by two of the children in the family. He did so well, that they began riding him in horse shows. The children then began riding Buster in gymkhanas. [A gymkhana is a riding competition with a variety of events that involve agility and speed on horseback.]

Sadly, Buster’s bucking behavior returned. He was adjusted by a chiropractor and the bucking behavior stopped, but only for a short while. Very soon he became “ring sour” [not wanting to enter the riding ring] and would start bucking as soon as he got in the ring. Buster was again returned to the rescue, having lived with his second family only 10 months.

That’s when Buster met Kelly. Kelly is one of four people who evaluate and train horses that come to the rescue in the hope that the horses can be rehabilitated and go to new homes. The rescue works with horses with all kinds of issues and have had good success with re-homing them.

Kelly found Buster to be very sweet and friendly. She knew that if they could resolve the bucking issue, he would again be a great children’s horse. Kelly and the other trainers worked with Buster for three weeks, but Buster continued to have problems. Kelly and the rest of the trainers had no idea what to try next to help Buster. They needed to find a way to get Buster to stop bucking or there was a real chance that Buster would be put down because he was too dangerous.

Then Kelly remembered that I’d talked her beloved horse Calliope in 2012, when Calliope was nearing the end of her life. Kelly thought that if we could talk to Buster and figure out why he was bucking, maybe we could figure out a way to help him. Kelly talked to the staff at the rescue about scheduling a communication session for Buster and they agreed to try it — they didn’t know what else to do to help him.

As soon as I connected to Buster, I felt that he was very, very sad. He said he felt that he was “no good — but I want to be good!” The feeling I got from him was that people kept discarding him, giving up on him, like he was trash. He said he loved people, especially children and wanted to be a good horse for children again. I assured Buster that he WAS a good horse and always had been. I told him it was not his fault that people didn’t understand what he was trying to tell them.

I told Buster that we wanted to try to figure out how to help him so he could find a new family and children who would love him and that he could love. I could feel Buster perk up — he was more than happy to talk, now that someone would listen!

My feeling was that the bucking was related to a physical issue, so I asked Buster how his body felt. He showed me that his back hurt — and it hurt even worse under saddle. He showed me that sometimes his back was fine, even under saddle, but other times it would start to hurt and then get really painful, especially when he was being ridden. He said, “I try to warn the rider that it hurts, but they don’t listen to me.” He showed me that if they didn’t get off and the pain got really bad, “I have to make them stop!” That’s when he would buck.

Kelly wanted to see if the type of saddle Buster was ridden in was a factor in causing him pain. When I asked Buster about different types of saddles (by showing him mental pictures), he was very clear about what he liked and what he didn’t. Buster showed me that large western saddles with long skirts that extended too far toward his hips/lower back were very uncomfortable. He showed me that the back part of the saddle and the long part of the skirt pressed against a spot in his lower back that could become very painful with the pressure. When I checked that part of his spine, it felt like he had a physical issue with that part of the bones of his spine. He showed me that he’d been ridden at some point in a western saddle that did not fit well and put pressure on both his withers area and lower back. Buster was concerned that whoever rode him should be sure that the saddle was back far enough so that his shoulder could move freely — previously, he’d had the experience of saddle that sat too far forward and impinged on both his withers and shoulders. He showed me that who ever saddled him shouldn’t throw the saddle on so it dropped hard on his back — that really hurt!

Next we asked about what type of saddles would feel good to Buster. He showed me that he was comfortable in English saddles and shorter western saddles with short skirts. Kelly confirmed that Buster had been ridden in both of these types of saddles at the rescue and that he did well with both. Buster showed me that he liked more padding under the saddle and that it was important that the saddle fit correctly to prevent pressure on his back.

We asked if there was anything else that the people at the rescue needed to know about his body so he could be more comfortable. Buster showed me that he wanted people to be careful when they brushed his back, because of the spinal issue. He showed me that he liked a soft brush on his back, not a hard or spikey brush.

I asked Buster if there was anything about his under saddle work that made him more uncomfortable. He showed me that he didn’t like doing lots of circles or making tight turns, which made sense due to his back issue since he would need to do more bending for those exercises — and for the gymkhanas.

Since we couldn’t completely resolve his back issues, I asked Buster if he could show us how he would tell someone that his back is bothering him. I told him that we would be sure to tell the people who rode him what to watch for, so he could tell them quietly, rather than loudly, by bucking. Buster was thrilled that people would finally listen to him — he didn’t like to buck! Buster showed me that he would put his ears back, he would crinkle up his nose/upper lip and would look back at the person riding him. He said that if he did that under saddle, the rider should “GET OFF!” He said that he wanted to be a good riding horse, but some days he really hurt, so the people should watch for those signs when they were brushing/saddling him too.

Kelly confirmed that she would pass everything Buster had told us on to the folks at the rescue, as well as to Buster’s new family if they could re-home him. Kelly was very committed to making this work for Buster. I told Buster that everyone who worked with him would know all the things he’d told us and that they would all do their best to listen and help him. Buster was happy, relieved and hopeful that things could be better for him — and so grateful that someone finally listened!

About a month later, I heard from Kelly again. She said she had shared everything that Buster told us with the staff at the rescue. Kelly said that the staff was very receptive to the information and wanted to do whatever they could to help Buster. It was a relief for the staff to finally understand the cause of Buster’s bucking behavior! Buster got two more sessions of chiropractic and massage therapy and he was put on an anti-inflammatory medication by the vet. Buster was ridden in a round skirt western barrel saddle (which didn’t interfere with his lower back/hips) and an English saddle. He worked happily and without discomfort in both and never flattened his ears once!

Buster was adopted by a family a few weeks after we talked to him. The family was given all the notes from our chat with Buster, so they would know what to watch for, what worked best for Buster and how to care for his back. The family was very happy to adopt Buster and was willing to continue the therapies as needed — and, most importantly, to listen if Buster said he was hurting! Kelly and the rest of the staff at the rescue were thrilled to have such a happy new start for Buster as a trail and pleasure horse for the family’s children. They are hopeful that Buster will have finally found his forever home with people who understand his needs.

“Thanks to Sky, Buster can be a safe pony, free of discomfort. He is another wonderful pony saved from an uncertain future. All of us at the rescue wish him a long, happy life with children to love again!” — Kelly H.

Update March 2018:
“Buster continues to do well with his new family, no bucking issues at all. He loves his kids and they love him very much. Thanks so much for your help with him. I am so glad we were able to help him and get him a great family.”
— Kelly H.