Buster And Sophie: Always Together

Buster And Sophie: Always Together 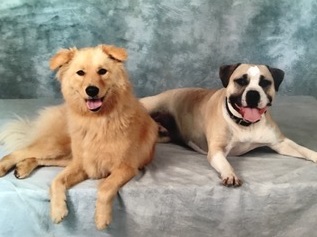 The first time I spoke to Nancy was at a metaphysical fair in Colorado. She told me that she had two dogs who’d recently crossed to Spirit — Sophie, a chow mix and Buster, a pit bull. Nancy had adopted the dogs within days of each other. She missed both dogs very much. Nancy said she was at ease about why Buster needed to cross to Spirit — he was very arthritic and weak. But she had questions for Sophie. Nancy didn’t tell me anything more at that point, so I connected to Sophie.

As soon as I connected to Sophie, I could feel what a strong, determined and very “in control” spirit she had. The first thing Sophie said was that everything was all right now — she was fine. Sophie showed herself to me as healthy and strong. It was clear to me that it was very important to Sophie that Nancy know this. Sophie also showed me that she was with another dog who was shorter than Sophie — I had no doubt that this was Buster. Buster looked happy, contented and perfect. Nancy explained that she had helped Buster and Sophie cross to Spirit on the same day. Nancy was greatly relieved — but not surprised — to find that they were together in Spirit.

Nancy told me she really needed to understand what happened with Sophie.

When I asked Sophie to show me what happened to her at the end of her life, she showed me being perfectly healthy — until just a few days before she crossed over. She showed me her nose and throat feeling congested and full of fluid. She also showed me pressure in her chest, but I couldn’t tell what was causing it. When I told Nancy this, she said it made sense.

Nancy reported that she had woken up one morning to find Sophie bleeding from her nose. Nancy rushed Sophie to the vet and the bleeding stopped. Tests showed that Sophie had an inoperable, fatal tumor behind her heart. Nancy was devastated — Sophie had always been so healthy! Nancy had been planning to help Buster cross to Spirit soon, but had assumed she’d have Sophie with her for many years. Obviously, with the inoperable tumor and threat of bleeding (which never recurred), Sophie would need to cross to Spirit very soon.

What Nancy didn’t understand was where the tumor came from, since Sophie had always been healthy and had no symptoms prior to the nose bleed. Her confusion about what happened made her grief over loosing both dogs even worse. She desperately hoped that Sophie could explain what happened.

Like our Guides and Angels, animals and people in Spirit see things from a different perspective. I think of it as “seeing the big picture” — being able to understand the reasons for things that happen and choices our soul consciousness makes that we might not be able to see clearly when we are alive. Because Sophie was now in Spirit, she was able to explain what happened.

Sophie told us that Buster told her that he would need to cross to Spirit soon. His body was failing and he knew that Nancy would help him cross to Spirit — but he was afraid to cross over alone. Sophie showed me that she and Buster had been inseparable since they’d been with Nancy — they loved each other and were bonded, like brother and sister. Sophie showed me that she was always the leader and Buster always followed her happily. Sophie knew that she couldn’t let Buster be alone and afraid when he crossed to Spirit, so she decided she would go with him. Sophie knew that she needed to make sure there would be no doubt in Nancy’s mind that Sophie needed to cross over with Buster — no question of whether she needed to cross over or not — so she created the tumor in her chest. Sophie said that she knew that Nancy would be OK after they crossed. She knew that Nancy would be sad, but she would be all right. Sophie didn’t think Buster could manage without her, so she chose to stay with Buster.

When I told Nancy this, she was shocked — but she agreed that it made perfect sense. Sophie always looked out for Buster and it only made sense to Nancy that she would continue to do so, even in Spirit. Sophie was a dog who knew her own mind and always followed her own plan in life — no surprise that she would do the same in death.

Nancy said that Sophie had read her right as well. Sad as Nancy was to loose both dogs at the same time, she knew in her heart that Buster needed Sophie more than Nancy did and she was very happy that they were together in Spirit.

Nancy told me later that she knows this is true because recently both dogs played a joke on her . . . a friend of Nancy’s got a new dog and named her Sophie and her nephew got a cat and named him Buster! Nancy knew that her Sophie and Buster were responsible for the name choices and it made her laugh with joy!

“Having Sky get this explanation from Sophie was a great relief to me. I had counted on Sophie being there to help me get over letting of Buster. The shock of an inoperable tumor behind Sophie’s heart was more than I could fathom. Talking to Sophie and Buster was such a relief to me. I am so happy that they are together and their loss is more manageable now that I know it was Sophie’s decision to stay with her best friend.
I am so proud of Sophie!” — Nancy J., CO.