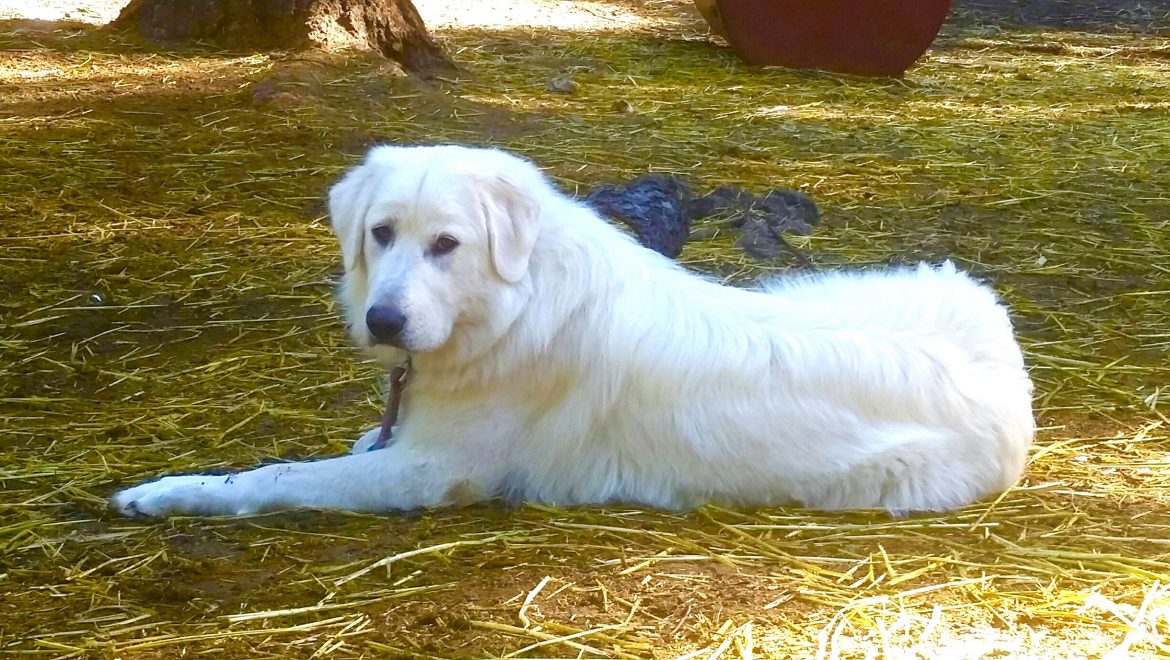 Gloria and her husband Marc have been adopting dogs who came from difficult circumstances for a number of years, including livestock guardian dogs (LGD) — but their love of animals is not confined to canines. On their farm they also have 16 sheep, poultry, an ox — as well as dogs and cats. Because they live in a very rural part of Washington state, the need for a guardian for their animals is critical due to the local predator population.

Tony, their LGD, was getting near to retirement age. Tony is a Maremma, an LGD breed similar to the Great Pyrenees, but taller and less bulky. Tony is a wonderful dog and when Gloria and Marc heard that there was a 7 month old female Maremma in need of a home, they eagerly offered to make her part of their animal family.

Not being beginners at adopting rescues, Gloria and Marc thought they would be able to help their new Maremma adjust easily. However, after 3 months things were not going as well as they had hoped, so they reached out to me. Their wanted to understand their new furry family member better and help her understood them better too. So we got an appointment scheduled to talk to their new dog, who they named Emmy Lou.

The first thing Emmy Lou told us was, “This is my home. I live here now.” Marc and Gloria were thrilled to hear this, since this was exactly what they’d been telling Emmy since the day she arrived.

They wanted to be sure that Emmy Lou liked her name. She said she did like it and that she was happy to have a name because she never had one before. She showed me that she’d been called “the dog” or “that dog” but didn’t have an actual name for the seven months prior to coming to live with Marc and Gloria — at least no name she recognized. Emmy said, “I know they [Marc and Gloria] love me because people name the things they love.”

We asked Emmy Lou about her work on the farm. She told me/showed me that she totally understood her job and was very proud of this fact. She knew she was responsible for guarding/observing and supervising all the animals who lived outside — they were all her flock — and she took her responsibility for them very seriously. Gloria asked me to let Emmy know that if she had any questions or wasn’t sure about something regarding her work, she could check with their retired guardian dog, Tony. Emmy quickly to pointed out, “I don’t really think he would have anything to teach me. I am an excellent guardian dog and I have a very good bark!” Gloria and Marc confirmed that Emmy’s bark was loud and effective. They were very happy that Emmy was so confident in her work.

Emmy’s observational skills are strong and she had opinions about other animals on the farm too . . .

Emmy Lou felt that Tony, the retired LGD, was sad. Gloria and Marc were not surprised to hear this, since Tony’s soulmate dog companion had crossed to Spirit 6 months before.

Regarding Rocky, Marc and Gloria’s 12 year old Yorkshire Terrier, Emmy told us, “he doesn’t have a job. He just lives in the house and has to have people take care of him.” I could feel Emmy’s pride in knowing that she took care of herself outside and did not need pampering. Marc and Gloria couldn’t stop laughing when they heard this assessment of Rocky. In his younger days, Rocky was constantly on rodent patrol at the farm, but when they acquired cats, Rocky turned the messy job of rodent control over to the cats. Since then, he has indeed become a pampered house dog.

We asked about the animals that Emmy Lou was responsible for — the sheep and goats. Emmy did not think the sheep were particularly smart, which is why they needed her to guard them. The two goats were a different story. Emmy showed me that anytime people were around, the goats were constantly trying to hog all the attention. The only human word I could find for Emmy’s feeling about their attention seeking behavior was “shameless” — and so undignified, in Emmy’s opinion, to seek attention like that! Gloria and Marc completely agreed with Emmy’s assessment — the goats were indeed “shameless” in their attention seeking!

One issue that we’ve talked to Emmy Lou about several times is the way she avoids and fears human touch. It was clear to me that this behavior was not personal to Marc and Gloria — it was related to what Emmy had experienced at her previous home. Hearing this was a great relief to Marc and Gloria — because they had been taking her avoidance personally and couldn’t figure out why Emmy avoided their touch. When I asked Emmy Lou what has happened to her before coming to Marc and Gloria, Emmy showed me only quick flashes of things, because she couldn’t bear to think about it. She showed me being grabbed by her collar and jerked/dragged from place to place — not just once, but all the time. That was her only experience of touch by humans. It felt to me like she was treated like an object, a tool to be used, not as a being with feelings. When I explained this to Marc and Gloria, they were heart broken to understand what Emmy had experienced. But this just made them more determined than ever to be patient and loving so Emmy could know that touch was positive and enjoyable.

Progress on touching Emmy Lou has been slow, but she’s trying to overcome her fears. Talking to Emmy has helped Marc and Gloria too. “Our behavior and attitudes are so much more relaxed now that we understand Emmy better,” Gloria stated. She and Marc are prepared to do whatever it takes to continue to help Emmy with this issue — including scheduling communication sessions as needed, since she shows progress each time we talk to her.

Recently Gloria and Marc contacted me because of a change in Emmy Lou’s behavior. For several nights, Emmy had been making an odd yelping, yapping bark which was totally different from her normal alert bark for predators. The yelping started around 11 PM and would continue for a while every couple hours until about 4 AM. Marc said he’d gone out to check for predators or other disturbance, but couldn’t see or hear anything and trying to comfort and calm Emmy Lou only helped until he went back in the house. They were at wit’s end, since all the yelping was keeping them awake and upsetting Emmy Lou. They were at a loss to figure out what the problem was and were getting more and more sleep deprived as a result.

When I asked Emmy about the cause of the yelping, it was completely clear that she heard/saw something unusual — but it was gong to take some detective work to figure it out.

I asked Emmy Lou if predators were causing her odd barking. Emmy was very clear the trigger was NOT predators — but there was something! She showed me a sound, but trying to translate dog audible sound to human audible was a challenge, believe me! Initially I thought the sound was like a short metallic screech — high pitched and unpleasant — but I knew it wasn’t actually metallic. The sound was very irritating to Emmy — like fingernails on a chalk board would be irritating to a human. I asked Emmy to show me more. She showed me looking up . . .

I had my suspicions, so I asked Marc and Gloria if they thought it was possible that Emmy was seeing/hearing bats hunting in the air above the field.

They both agreed that there were bats in the area, in fact there had been a real uptick in the numbers lately, and the timing made sense too, including the intervals between yelping sessions as the bats flew to other areas and came back. So my suspicions were correct — Emmy Lou was seeing/hearing bats flying above the fields catching insects stirred up by her and the animals. Marc and Gloria were thrilled to finally know what the issue was!

I went over all of this several times, reinforcing that the bats were part of Emmy Lou’s flock and that they protected the flock just like Emmy Lou does. Emmy Lou, who always needs to think things through, considered what I’d said. Finally she said, “OK. They are part of my flock.”

There are never any guarantees about behavior issues, but I was optimistic that Emmy Lou would be able to stop barking at the bats. But only time would tell . . .

The next day, Gloria emailed with an exciting update, “You hit a home run with that communication! Emmy Lou barked only a couple of times last night — brief and annoyed, but not the wacky, yelping bark she was doing before you talked to her. Your deduction that the bats squeaking was upsetting her and your explanation to her that they were doing good things made a HUGE difference!”

I got further feed back from Gloria the following day — “No barking last night! Again, I am amazed! The bat deduction basically turned off her barking which had been keeping us awake for nights on end!” There has been no yelping barking since.

After a bit of detective work, finding an explanation that made sense and coming up with a plan for dealing with the issue — Marc and Gloria can get a good night’s sleep again and Emmy can supervise her ground and air flock without distress!

“Here’s the big thing . . . We thought Emmy’s weird barking was a deep behavioral or psychological problem on her part. What we learned, after Sky talked to Emmy was that her behavior was entirely appropriate! Emmy had a problem and she was responding to it the best she could. It was us who didn’t understand the problem.

So Sky to the rescue! With Sky’s help and ability to interpret Emmy’s information, we learned what was happening. This gave us real empathy for her response and now we know how to support her. Emmy learned what was causing the noise and was willing to have a higher tolerance. We all Win!! How cool is that?” — Gloria and Marc F., WA.