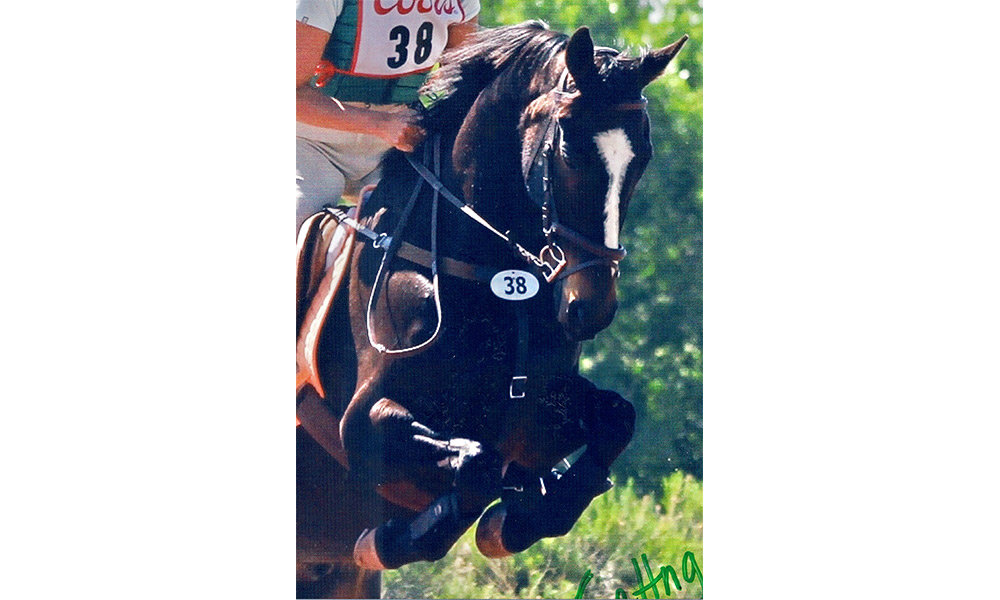 Eventing is a very challenging equestrian sport. For those of you not familiar with the horse world, eventing is an equestrian event where a horse and rider are required to show their skills in three different areas:

— Stadium Jumping (where the horse jumps fences in a riding ring),
— Cross Country (an endurance test where a horse jumps unusual “fences” made of unusual materials and shapes, ditches and water. Jumps are widely separated and horses must gallop between them) and
— Dressage (what people often think of as “dancing”).

These three events are usually done over the course of three days. Eventing is an endurance test for both the rider and the horse, who not only have to remain strong and brave through the competition, but also accurate and skilled in all three events.

Handsome was an event horse and his person was Valerie. She competed with Handsome and works professionally as a trainer and riding instructor. Valerie knew that Handsome had everything it took to be a great event horse — courage, stamina, skill and desire to compete . . . but he had one issue that she hadn’t been able to work out. When Handsome was doing cross country jumping, anything that caught his eye would cause him to spook. This can be a disastrous thing for both the horse and rider. Valerie is a very experienced rider and was able to handle Handsome’s spooks, but the problem was that Handsome would become rattled after a spook and would be difficult for Valerie to get him to refocus again.

Valerie knew she and Handsome needed help with this and asked me to talk to him. I asked Handsome how he felt about his work as an event horse. He told me that he loved his work and took it very seriously. He showed me that he was very focused, especially when he was doing the cross country jumping. In fact, it was almost like he got tunnel vision — he was so focused on what was ahead of him, that things he saw out of the corner of his eye seemed to “come out of nowhere” at him. This inevitably startled him and caused him to spook.

I asked Handsome how Valerie could help him with this. Handsome gave me the image of coming up to a jump and being distracted by something in his peripheral vision. He next showed me his reaction to the distraction — raising his head and slowing his momentum — what horse people call “sucking back”. He told me that this was his way of asking Valerie, “Is it [the distraction] OK? Should we go on?”

When I told Valerie this, she laughed. She said Handsome had done exactly that coming up to a jump at their last show. At the time, she didn’t understand that he was asking her a question. She thought he was going to stop in front of the jump. I asked Handsome what Valerie should do when he “sucked back”. He showed me that, if the distraction was nothing to worry about, she should tell him, “It’s OK — keep going!” I suggested that she so this out loud, as well as thinking the words and feeling the “OK” part. Valerie said she could definitely do that and would do exactly that.

Valerie was also concerned because Handsome would get upset when the horse that came to the show/event with him in the trailer would leave for his/her turn to compete. When I asked Handsome about this, he said, “Sometimes they don’t come back.” I asked Valerie if Handsome had ever been at events when other horses had been injured and had not returned home. She said he had, although this had never happened to a horse Handsome trailer with. She said he had seen horses injured though, which explained why he was worried. I suggested to Handsome that the best thing he could do for his horse friend while his buddy was competing was to be calm and watch for him/her to return to the trailer.

The day after our conversation, Valerie took Handsome on a challenging ride to a hiking area with plenty of distractions and limited vision ahead on the trails. Handsome had lots of opportunities to practice asking, “Is it OK? Should we go on?” Valerie did what we discussed, saying, “It’s OK! Keep going!” Handsome did just that every time.

Valerie said the first time this happened was the best . . . They were trotting up a steep hill with bicycles, strollers and people on both sides at the top of the hill. That could have been a complete disaster and likely to rattle any horse. Valerie told me, “Handsome trotted boldly half way up the hill — then raised his head, sucked back and clearly asked, ‘Is it OK? Should we go on?’ I laughed out loud in surprise, told Handsome he was a good boy and “Yes, it’s OK — let’s go!” And they did!

Valerie reported that Handsome had no trouble using the same technique at the next show and the “pause” when he sucked back got shorter and shorter as the communication process about the distractions improved. Also, when his trailering buddy left to compete, Handsome watched her go and stood alertly, but quietly, until she returned.

“Thanks Sky — Handsome and I are getting better all the time!” — Valerie, CO.