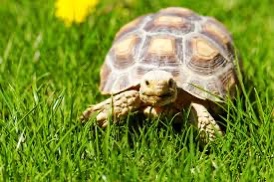 I met Mary and Simon at a metaphysical fair in the UK. We talked to their cats, both at fairs and by phone, several times. Recently, the cats were having health issues that we needed to talk to them about. At the end of the session, Mary also wanted to talk to her tortoise, Henry.

Mary told me that Henry was allowed to roam free in the garden. The garden (that’s the back yard, for you folks in the US) has a low wall around it, so they hadn’t had any concern that Henry would escape. Mary said that Henry would disappear occasionally, but would always reappear in a few hours, so she didn’t get concerned about his disappearing act.

One day the week before we talked, they couldn’t find Henry when they looked for him. They weren’t too concerned until the next day when Henry still hadn’t shown himself. At that point, they got really worried and searched everywhere, but there was no sign of Henry.

A few hours later, Mary received a call from a friend who said that she’d seen a post on Facebook from a local school saying that some kids had found a tortoise and brought it to school. The school posted on Facebook about it, hoping to find the tortoise’s owner. Mary knew immediately that this was Henry and went to pick him up. Henry was safe again in the garden at home.

Mary wanted to know how Henry got out of the garden. As soon as I connected to Henry, I felt he was very intelligent and like to experiment, try things out and he showed me that he especially liked to climb on things. Mary confirmed that all this was true — Henry was not your typical tortoise!

Henry showed me that the day he’d escaped, he’d been having his usual wander in the garden and came upon something that he could climb upwards on. He was intensely curious and excited to investigate where this would lead him! Henry’s intent was not to escape, just to see where his investigation would take him. Henry has an adventurous spirit for sure! Mary confirmed that Henry had always been amazingly curious and interested in investigating new things he came across.

Henry showed me climbing up to the top of the wall. It took some figuring on Henry’s part to see how to do this, but Henry persisted and figured it out. I asked Mary if this was possible — she said, a bit ruefully, “It is.” Henry showed me that when he got to the top of the wall, he over balanced to the outside of the wall. As his weight tipped, he showed me pulling his head and legs into his shell for protection. Mary said she’s seen Henry do exactly that other times when Henry was exploring and climbing.

Henry showed me that once he’d recovered from falling over, he looked around and then started off very enthusiastically for parts unknown. That may sound silly, but that’s exactly what he showed me! Henry was eager for his adventure and felt safe and very brave. He showed me striding through the grass — or what could be considered striding through the grass if you are a tortoise. He showed me he felt he was walked for a long time and went a very long way.

Mary said that Henry had indeed gone a long way — the kids found Henry two fields away from Mary and Simon’s house!

Mary asked if the kids had mistreated Henry. He showed me that the kids “were disrespectful,” poking him so he’d withdraw his head/legs and tapping his shell — but they didn’t hurt him. Henry said that he was grateful that the kids found him, because they got him back to Mary and Simon — not that he was ever really worried that he wouldn’t get back safely, of course. Henry is a very confident tortoise!

Mary was concerned that Henry would try to wander again. He said, “I enjoyed my adventure, but home is best.” He showed me feeling very content and happy to be home. Henry told me he had no intention of wandering again . . . but I encouraged Mary and Simon to really “tortoise-proof” the garden just in case. They said they definitely would do that.

There was one more question on Mary’s mind . . . When Henry is in the garden and they can’t find him, where does he hide? When I asked about this, I could feel Henry smiling. Henry showed me that his hiding place was a dark, hidden place that he went to. He said, with pride and self satisfaction, “But where that hiding place is, is my secret.” My impression was that when Henry went to his hiding place, he felt he was invisible — and it was fun for him to be “invisible” and watch Mary and Simon looking for him. Clearly, tortoises have senses of humor just like everyone else!

I hadn’t seem Mary or Simon for quite a while, but they came to see me at a recent fair in the UK. The first thing they told me was that Henry had “done a runner” in July — escaping from their back garden yet again. Of course they wanted to talk to him about it.

Mary said they’d done their best to “tortoise proof” the back garden, but still Henry escaped. When I asked Henry how he got out, he showed me a back corner of the garden, where two walls came together — it seemed to me to be on the right side of the yard at the back. Mary and Simon confirmed that it was possible he got out there. I asked Henry to show/tell me how he got over the wall. With as much pride as a tortoise can show, Henry said, “I’m not telling ALL my secrets!” From what Henry showed me, it looked to me like this was the opposite side of the garden from where he escaped the last time. Mary confirmed that this was true.

Mary said that Henry went through a field, across a neighbor’s garden and was walking down the side of a road when a kind man stopped his vehicle and picked Henry up. The man took Henry home and told a friend he’d found a lost tortoise. The friend had another friend post a notice on FaceBook about the lost tortoise. As happened the first time, a friend of Mary and Simon’s saw the post and alerted Mary that someone had found Henry.

Mary set out as soon as possible to retrieve Henry, but on the way her friend notified her that someone else had also lost their tortoise and was going to see if the “found” tortoise was theirs. Mary realized she would now have to provide proof of identification that the lost tortoise was Henry. After a moment of panic, Mary remembered that Henry had a distinctive orange marking on his shell. The man who found Henry verified that the “found” tortoise had the distinctive orange marking on his shell and Henry was reunited with Mary.

We told Henry that Mary and Simon were very worried about him and that it was very, very dangerous to wander off like that. Henry said, with supreme confidence, “I know they were worried, but [not his words, but the feeling of “I had everything well in hand”] — and besides, I was on my way home.”

Mary and Simon told me that since the latest escape, Henry has been grounded. They made him a pen outside, that they are sure he can’t escape from, but allows him time in his beloved outdoors. I asked Henry about the pen. He said he would like it to be bigger and he wanted some things that he could climb on inside the pen. Mary said they could take care of both of those requests. Henry was happy to hear it and, at least for now, is happy to stay in him pen.

“Thank you for talking to our animals, Sky — it makes all the difference!” — Mary D., UK.