Honey : Releasing the Past

Honey : Releasing the Past 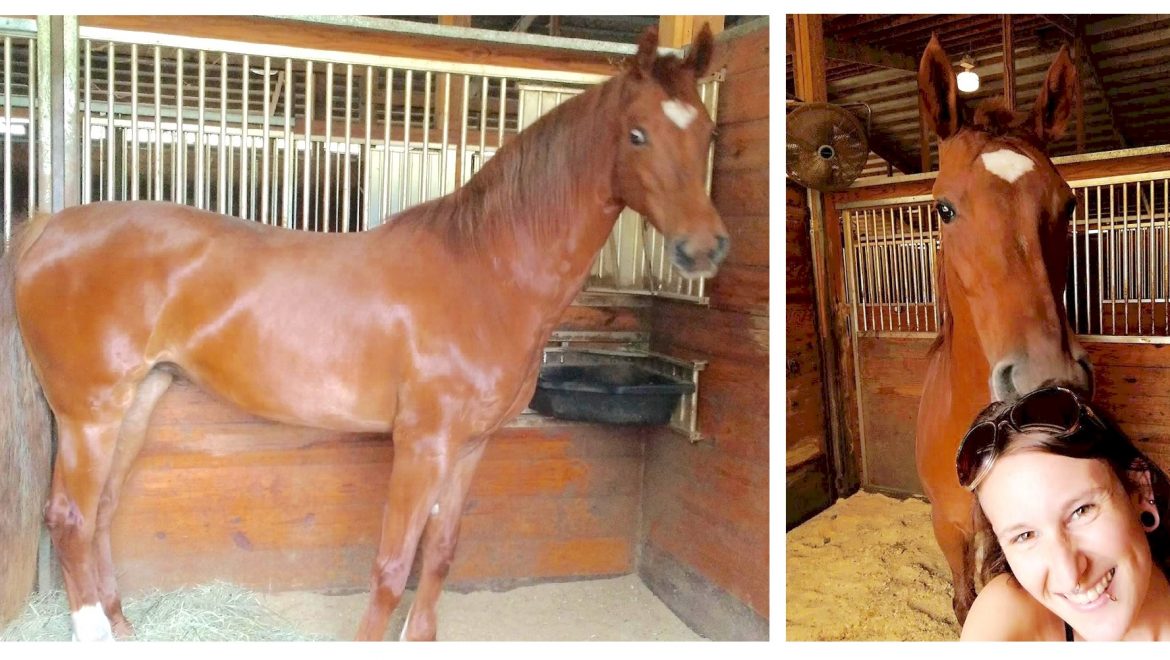 Samantha contacted me about her horse, Honey, who is a beautiful chestnut colored Saddlebred mare. Honey had been with Samantha for 5 months at that point — and things were not going well. Samantha reported that Honey was not warming up to her the way Samantha expected. In fact, even after 5 months, Samantha couldn’t touch Honey’s face and in her stall, Honey would bite and kick with no warning, making going into Honey’s stall risky. Catching Honey outside was impossible too. Added to that, Honey wouldn’t canter in the indoor arena and had reared straight up in the air one time when asked to canter indoors.

Samantha wondered what she’d gotten herself into, but she was determined to figure out what was going on with Honey. She sent me a photo of Honey — the photo on the left above. You can see the tension in her wide eyes and in her body language clearly. Samantha said this was Honey’s “normal” appearance — tense and on guard.

The first time I talked to Honey, Samantha was at the barn with her. When I connected to Honey, my initial impression was of mental chaos, like she was spinning. Honey said she wished she could calm down and relax. Samantha told me that at that moment, Honey had just been spooked by something outside and was in fact, spinning in her stall. We gave Honey a couple minutes to calm down, then continued the conversation.

I felt a tremendous amount of mental and physical tension from Honey — this seemed to me to be Honey’s normal state, not related to the spooking. Samantha confirmed that Honey never relaxed. Samantha wondered if pain in her body was a cause of Honey’s tension. Honey showed me that her teeth were painful and were rubbing on the inside of her cheeks. It felt to me like she needed to have her teeth seen to by the vet or equine dentist. Honey showed me that she also had pain in her poll, withers and sacroiliac joint and her left stifle. She showed me having a lot of muscle pain too — related both to the areas of pain she had mentioned and also from the tension she was carrying in her body. Basically, she was sore all over. Samantha said she would have Honey’s teeth looked at and also would have the vet do a lameness exam and chiropractic.

Samantha wanted to see if we could find out why Honey got so upset when asked to canter in the indoor. Honey showed me that a previous rider [not Samantha] had pushed her to the point that she felt she was incapable of doing what she was being asked to do. From what Honey showed me, the previous rider was trying to get Honey to “gait”. Saddlebreds are known for being five gaited horses — they have two additional gaits besides the walk, trot and canter. But not all Saddlebreds are five gaited. Honey showed me that she did her best to show this person that she couldn’t do what was being asked, but the person didn’t listen. Finally, Honey had no choice but to say “NO” in the loudest possible way — by rearing. Even thought Samantha was not pushing Honey to do anything but a simple canter, she was panicking and reacting out of fear. When I told Samantha this, she confirmed that Honey was not five gaited and understood why Honey was so frustrated by being asked to do something she wasn’t physically capable of doing.

Samantha said she did not want Honey to have fear when being ridden. We assured Honey that Samantha would always listen and would never ask her to do anything that she wasn’t capable of doing. Samantha agreed that if Honey was ever uncomfortable in the arena, she could bob her head and swish her tail and Samantha would immediately take her out of the arena, no questions asked. Honey thought this was a brilliant plan. She was so relieved that Samantha would listen and she said she would try to be brave and follow the plan. I also suggested that Samantha try walking Honey into the indoor arena, walk a circle, trot a circle if Honey was OK, then walk out and ride outdoors — slowly increasing the time working indoors as Honey learned it was safe. Samantha agreed completely with this plan and so did Honey.

Finding out what kind of work Honey wanted to do was very important to Samantha. To find out, I needed to know what the options were for Honey. Samantha said that Honey could continue to the specialized saddleseat work that she’d been doing before she came to Samantha or she could try dressage, trail riding or jumping. I showed/told Honey all the options. Honey was very clear that she did not want to do the saddleseat work ever again. But she was very excited and interested in jumping! She showed me that she thought she jumped beautifully and was really good at it. Samantha said that she’d tried Honey over jumps a few times and she did really well. Its pretty unusual for a Saddlebred to jump, but clearly, that was what Honey wanted to do and Samantha was excited to find work that Honey would love. I asked about trail riding and Honey liked that too. Honey wasn’t too sure about dressage, but when I told her it would help her get strong and fit, she said OK to that too — “but mostly jumping and trail riding” — Honey knew what she wanted!

Finally, we needed to talk to Honey about her behavior in her stall — the biting and kicking. Honey seemed reluctant to talk about this but finally said that she didn’t know if she could trust Samantha. It was very sad for Samantha to hear this, but it was clear to me that this lack of trust was not because of anything Samantha had done. When I asked Honey if she felt she had a relationship with Samantha, she showed me that she didn’t. In fact, she actually didn’t have any idea what it meant to be in a close relationship with a person. She showed me that she had always been treated like “a thing” — like a piece of equipment — by her previous owners. She was never given any affection and was only touched as much as was necessary before and after working. This made her feel unsupported, isolated and distrustful.

I assured Honey that Samantha loved her and wanted to be her friend. Honey admitted that Samantha never did anything to hurt her. I reminded Honey that Samantha made sure she had good food, a safe stall, turn out and was a kind rider because Samantha loved her and wanted to have a close relationship with her. Honey showed definite interest in the idea of a close relationship with Samantha. I suggested that, rather than biting and kicking, it would be better if Honey was nice to Samantha and showed her affection. Honey thought about that for a minute and said, “How?” She truly did not have a clue about how to be affectionate with Samantha! I told/showed Honey that when she heard Samantha’s voice, she could look for her and come toward Samantha when she came to her stall or pasture. I showed/told Honey she could touch Samantha gently with her nose, lower her head and relax. I felt Honey sigh in relief when I showed her these things. She said she really wanted to try! I asked Honey how she liked to be brushed. She showed me that she preferred the softest of the brushes and would like to be rubbed at the base of her neck/withers area.

I told Samantha what Honey had said and she was eager to try to bridge the gap so she and Honey could be friends. Samantha admitted that she was anxious when she interacted with Honey in her stall, due to the biting and kicking. I assured her that was totally understandable, but reminded her that Honey would read that anxiety as fear, which would only make Honey more fearful herself. I encouraged Samantha to approach Honey with an open heart — with nonjudgmental, positive energy — the same way she approached other horses. Samantha was eager to try.

Samantha and Honey were both ready to start the next phase in their relationship!

About an hour after the communication session finished, I received an email from Samantha with a new photo and this note: “I took this photo [the photo on the right, above] just after we finished talking to Honey. The difference in her whole expression is astounding! For the first time, Honey reached out and touched me with her nose and put her head down so I could stroke her face. I nearly cried. Thank you so much for the huge difference you’ve already made!”

I received an update from Samantha again, a few months later. She said she’d had Honey’s teeth taken care of. “They were in rough shape”, Samantha reported – but afterwards Honey was much more comfortable in her bridle and more relaxed through her jaw. Honey also got chiropractic and the chiropractor found “everything was either out or sore, just like you said.” Honey needed adjustments at the poll, withers and sacroiliac joints — exactly the areas she’d told us were painful. Honey also had a lameness exam and the vet found Honey’s left stifle “was in pretty bad shape”. But with a good quality joint supplement, an herbal calming product to help with anxiety and plenty of love and support from Samantha, Honey’s fear of the arena have completely disappeared!

The relationship between Samantha and Honey has also continued to change for the better. Samantha said that Honey now likes getting scratched and getting her face brushed and “she’s constantly searching me for treats!” Honey has also gotten very protective of Samantha and has even “guarded” Samantha from other horses, even Honey’s best horse friend.

Samantha reported that Honey is not doing any saddleseat work any more and “is having a blast with jumping!” Samantha said it was clear to her that Honey was “born to jump”, taking to it naturally with no awkwardness. “She never touches a fence rail and is the most powerful jumper I’ve ever ridden,” Samantha said.

Honey and Samantha have developed a trusting, loving and happy relationship and a bright future together.

“Honey is 100% a new horse, thanks to Sky! Honey is one of the bravest, most willing and most athletic horses on the farm and I can’t thank Sky enough for helping us get to where we are now.” — Samantha C, KY.