Midnight: Not a Fan of Fans

Midnight: Not a Fan of Fans 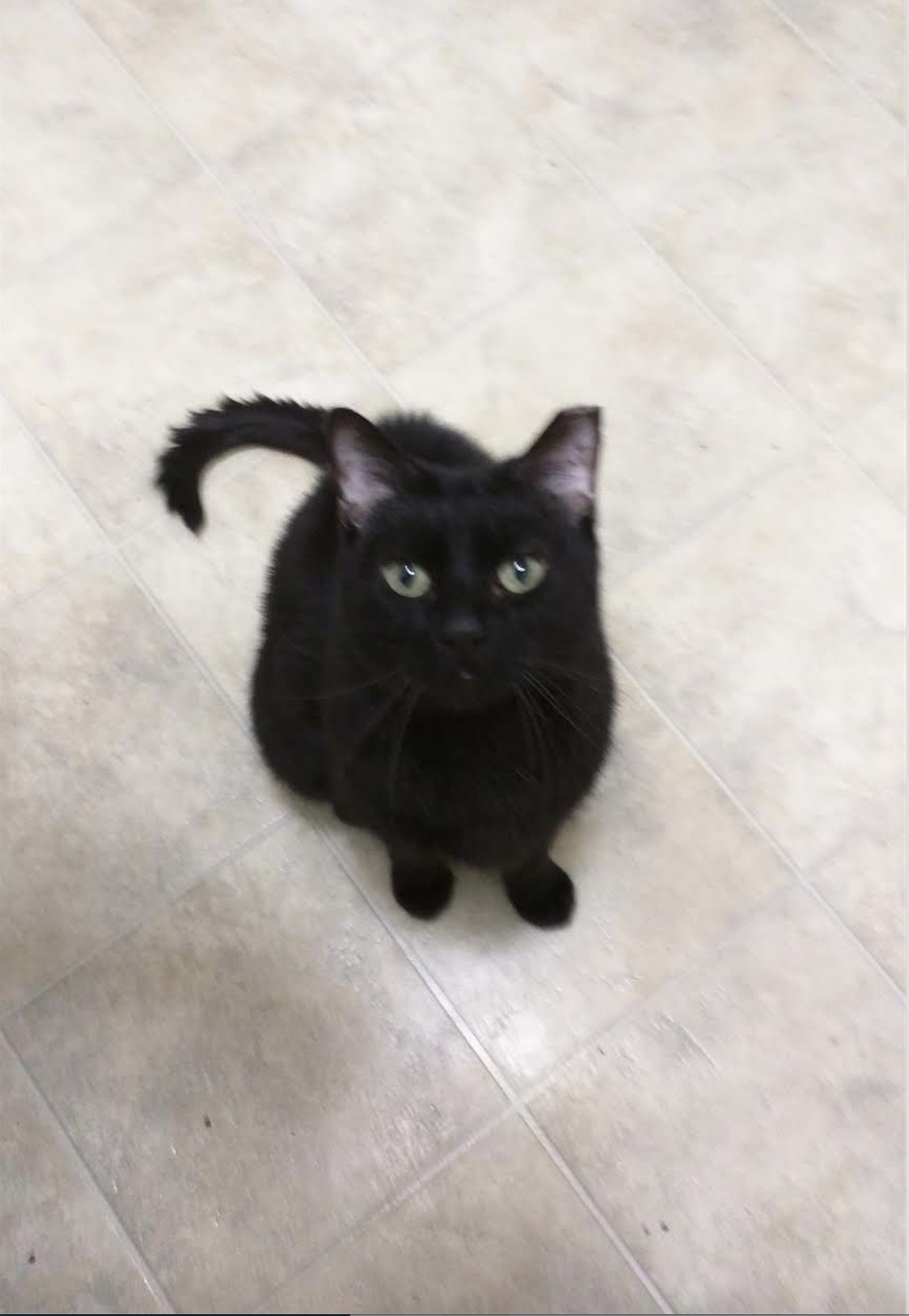 I first met Jenna, who is a pet sitter by trade, at the metaphysical fairs in Colorado. She had a client who needed to move east for health reasons and had to find homes for his beloved cats. The client rescued feral cats — some remained outdoor cats, others by choice became indoor/outdoor cats. Jenna’s client picked out a young, adorable all black cat for her. Initially Jenna was more interested in a different cat, but agreed to take the black cat. He has been a joy in her life ever since!

The first issue Jenna wanted to deal with was the black cat’s name. He came with the name Blackie — but Jenna didn’t really think that was the right name for him. When I asked the cat if he liked that name, he was very clear that he did NOT. I asked him what name he would prefer . . . he showed me the feeling of “cool and dark” — like the middle of the night. I suggested Midnight, which both the cat and Jenna loved. That has been his name ever since.

Another initial challenge was inappropriate scratching. As Jenna put it, “He is scratching the heck out of my couch!” When I asked Midnight about this, he showed me that he felt the couch was a special project for him — and he was very pleased about making real progress destroying it! He couldn’t understand why Jenna cared if he destroyed the couch. Remembering Midnight’s feral origin, I explained that it was a “human thing” to want to keep things in the house clean and neat. I told him that would make Jenna happy if he only used appropriate things (I showed him mental pictures of the scratching posts Jenna had) to scratch on. I told Midnight that since Jenna gave him a good home, only scratching appropriate things would be a great way to thank her for all she’d given him. Midnight agreed that he could do this for Jenna. Jenna reported that with only a few reminders, Midnight never scratched on the couch again.

When Jenna started dating Brian, he didn’t have much experience with cats — he was more of a dog person. But since Jenna had cats, he was learning how to be with them. The first time I met Brian, they’d come to the fair with a problem. Brian wanted to know why Midnight had started pooping in his closet. When I asked Midnight about this, he was very clear that Brian had done something to upset him. Midnight showed me that Brian had gotten upset with him and yelled at him — although Midnight admitted that Brian only yelled at him once. I asked Brian if this was true and he confirmed it was. Brian realized immediately that this was no way to handle things and he promised never to do it again. I told Midnight that Brian was sorry and wouldn’t do that again. Midnight said, “OK” and never pooped in Brian’s closet again . . . nor did Brian ever yell at Midnight again!

A year or so later, they had a friend watching the cats while Jenna and Brian were traveling. They came to see me at the fair a few months later and reported that their pet sitter had told them that Midnight had not left the back of the apartment for the majority of the time they were away and had used a bath mat as a litter box. This behavior was totally abnormal for Midnight and they wanted to know what happened. Midnight showed me that there was something terrifying in the front of the apartment — something so terrifying that he didn’t even want to “look” at it so I could see it! When I told Jenna and Brian this, they knew exactly what it was — the ceiling fan in the living room, which the pet sitter had told them she’d kept on much of the time they were gone.

When I asked Midnight about the ceiling fans, he showed me that he was afraid the ceiling fan was going to come off the ceiling and crush him if he stayed in the room with it. He could clearly see the slight wobble of the fixture where it connects to the ceiling (which is normal in ceiling fans). The moving blades that are normally still — then suddenly start spinning — looked to him like they would spin off or come at him. The downward force of air from the fan made him feel like it was coming down to crush him. Basically, the fan was terrifying in every way!

I asked Midnight is he’d ever seen the fan leave the ceiling or the blades come off. He admitted he had not — but he kept pointing me at the wobble of the fixture. I told him that was normal and didn’t mean it would fall off the ceiling. I asked him if he thought that Jenna and Brian would use the fan if the fan was dangerous. Midnight replied, “Humans can be stupid!” Good point, right? But when I asked him if he thought that Jenna or Brian would ever intentionally put him in harms way, he agreed that they would not.

I told Midnight that even though the blades of the fan moved quickly, they would never come off. Because he’d accepted the idea that the fan wouldn’t fall off the ceiling, this was an easier concept for him to accept.

Finally, I showed Midnight the picture of a light switch and how a person could turn the lights on and off with the switch. He seemed to understand this concept once I explained it. He showed me that he’d seen Jenna with her hand on the light switch before the lights went out. I told him/showed him that the fan worked the same way and that it is totally under control of the humans. Once he understood, Midnight was better able to accept that ceiling fans might not be dangerous.

I asked Midnight if he thought he could watch the fan from a protected place so he could see that it was safe. He showed me that there was a coffee table that he could shelter under and still see the fan. I asked Jenna and Brian if this was an accurate picture. They confirmed that there was a coffee table that Midnight could crouch under and still be able to see the fan.

I suggested to Midnight that when Jenna or Brian turned the fan on next time, that he should sit under the coffee table and watch the ceiling fan. I encouraged him to be very brave and just watch the fan. I told him that he would be safe and could watch as long as he wanted until he knew it was safe. Midnight said he would try very hard to be brave.

I told Jenna and Brian the plan and suggested that they be sure to tell Midnight in advance that they were going to turn on the fan (tell him verbally and “think” a picture of turning on the ceiling fan), so Midnight had time to get under the coffee table. Jenna and Brian said they would do exactly that.

The next time I saw Jenna and Brian at a fair they couldn’t wait to tell me what happened with Midnight and the fan! Jenna said that when they got home, after we talked to Midnight about the fan, that she found Midnight waiting under the coffee table. It was clear that Midnight was ready to watch the fan. Jenna said she told Midnight that she was going to turn on the ceiling fan — then turned it on. Midnight stared at the fan from the safety of the coffee table for about 15 minutes, then wandered off calmly. Jenna reported that since then, Midnight has shown no concern what so ever about any ceiling fan!

Jenna told me that they moved into their new place and both the cats were settled and happy. Midnight continues to be unconcerned about the ceiling fans in the new place and Jenna and Brian are happy to be able to finally use the fans!

“We always say how lucky we are to have the best cat. He is just so ‘cool’, like The Fonz! He has a fantastic personality and disposition. Yet without Sky’s help, he could have had SO many irritating cat habits. Thanks to Sky’s conversations with Midnight, we have such a happy cat home!” — Jenna J., CO.