Pasquale: His Gift of Trust

Pasquale: His Gift of Trust 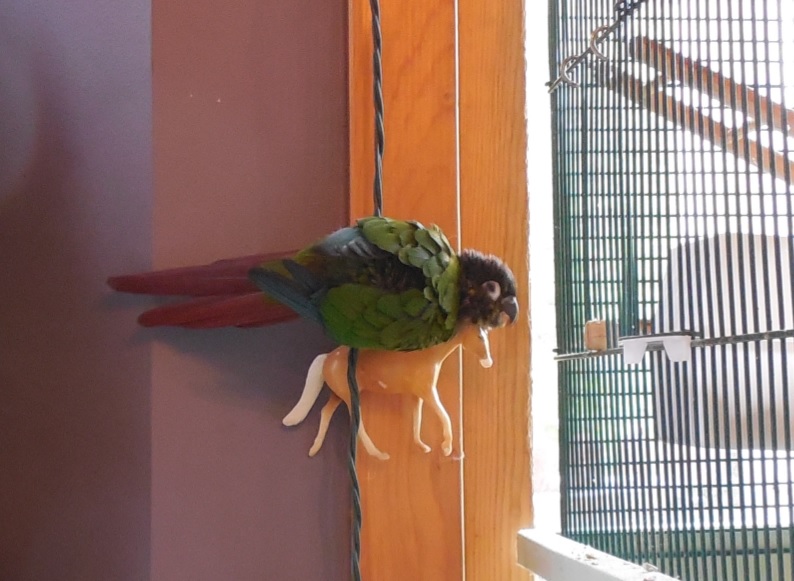 I met Janet many years ago at a “Hags and Nags” get together. The group was for women who rode horses — and they definitely did not take themselves seriously! I had been invited to the gathering to do animal communication. I talked to many of the women and their animals, including Janet. She was fascinated by the communication session I did for her horse and when she found out that I also did massage for horses, she couldn’t wait to schedule an appointment with me to massage her horse.

I did equine massage for Janet’s horse, an off the track Thoroughbred named Amtrack, for the next 15 years or so. We did animal communication with Amtrack too and we also talked to Janet’s other animals — dogs, cats and her bird, Pasquale, a Green Cheeked Sun Conure — many times over the years.

Green Cheeked Sun Conures are beautiful birds and Pasquale was no exception. But Pasquale was a one woman bird — and that woman was Janet! Janet told me that when she had her own business with a shop location, she would bring Pasquale to work. He would happily sit on her shoulder, climb on her and generally supervise. But if anyone came into the shop, Janet had to put Pasquale back in his cage because he would be come very protective of her.

When I moved from NJ to CO, Janet was kind enough to let me stay at their house so I could see my clients that were located north of her more easily. As a result we got to spend a lot of time together and we became close friends. Janet would often let Pasquale out of his cage when we sat at the kitchen table talking. Janet always warned me not to touch Pasquale and to keep my hands/arms out of his reach because he was likely to bite. I followed her rules with Pasquale to the letter and was very respectful of his space. It was interesting to see an animal that only weighed about 4 oz. so clearly dominate the space he was in — and his personal space was very large for his size! Despite being as respectful as possible, I always felt that Pasquale was giving me “the stink eye” and daring me to challenge him. Needless to say, I never did!

Janet developed cancer and gradually had to decrease her activity level and give up riding — but she still wanted Amtrack to have his massages. I continued to stay with her when I was in NJ during this time, watching TV and chatting with Janet (because that was all she had the strength for as the disease progressed) and giving her what emotional support I could. Janet’s body may have been weak, but her spirit was strong and she fought her disease process as hard as she could with a positive attitude. Pasquale, whose cage was in the kitchen, was witness to these ongoing visits with Janet and our close friendship.

The last weekend I spent with Janet, she was very weak but funny, positive and cheerful as ever. When I got back to their house after a day of massaging horses, I found Janet sitting on the couch with Pasquale, who was having a wonderful time climbing around on Janet. I offered to sit on the other couch, so I didn’t bother Pasquale, but Janet said she thought it would be OK for me to sit with them — so I did.

After I got settled, Pasquale walked across the cushions toward me. His energy was different from before — he seems to be friendly and interested, rather than protective and threatening. Initially, Janet moved Pasquale away from me several times, but he was persistent in wanting to come near me. I suggest that Janet just let him come to me if he wanted. I promised to keep my fingers out of his way — but I really didn’t feel like he would try to bite.

It was at that point that what felt to me like a miracle happened. Pasquale walked across the couch, pulled himself up on my leg by grabbing my jeans with his beak and feet and started walking down my leg to my fuzzy slippers! He then cuddled himself up on my slippers and looked like he was napping. He snuggled there for about 5 minutes. Then he walked back down my leg to my lap and started rubbing against the back of my hand — clearly he wanted some pets! I stuck out a finger and he rubbed his head against my finger and then let me pet him. I had never petted a bird before — it was a magical feeling having this tiny feather being trust me enough to let me pet him! As I petted Pasquale, he closed his eyes in pleasure. I wasn’t sure which one of us was enjoying the petting more. When he had enough pets, he climbed around on me for a while, got some more pets — then gently nipped my finger, but did not bite hard. Janet said that meant that he was tired and wanted to go back to his cage, so she put him back in his cage. Both of us were a bit stunned with Pasquale’s display of trust and affection — for my part, I was speechless! I have been given many gifts by animals over the years and the gift of trust that Pasquale gave me that day is one I will always treasure.

Not long after that Janet lost her battle with cancer. It was a very, very sad day for me and everyone who knew her. I was able to go to the gathering that Janet’s family organized in her honor. The house was full of people — she touched so many lives! The occasion was sad, but it was also a celebration of the light, positivity and laughter that was Janet.

At one point, I was standing in the kitchen alone and felt that Pasquale’s energy was focused on me. When I turned to look, Pasquale was indeed staring at me intently. Normally I don’t talk to people’s animals without permission, but I felt strongly that Janet would want me to talk to Pasquale, so I did.

When I connected to Pasquale, he became very still and continued to stare at me. He seemed to be worried and concerned. The first thing Pasquale said was, “Do you know she [meaning Janet] is in Spirit?” I assured him that I did. He told me that Janet had visited him and told him she was fine and that he would be OK. He showed me that Janet looked beautiful — young, healthy and happy when she visited him from Spirit. He wanted to know what all the people were doing at the house. I told hm that they were all there to honor Janet’s memory and share the connection that they had with her. I felt Pasquale was very pleased that so many people would do that.

He then said, “What is going to happen to me?” I assured Pasquale that Janet’s husband would find a good home for him. He said, “Can’t I come home with you?” This was completely unexpected and my heart hurt when I heard it. The feeling I got from Pasquale was that he wanted to be with someone who would understand him. Feeling Pasquale’s sadness at loosing Janet and not knowing who would care for him brought tears to my eyes. With regret, I told Pasquale that, much as I would love to take him home, it was not going to be possible. Pasquale said he understood and accepted my decision. I assured him that Janet’s husband would take very good care of Pasquale until he could find a very nice person for him to live with who would take care of him, love him and respect him. Pasquale cheered up a bit at that point and said he trusted Janet’s husband would do that — for Janet and for him. I thanked him for honoring me with his desire to come home with me and thanked him for the trust he showed in me.

When I disconnected from Pasquale, he stopped staring at me and went about his business in his cage.

After things had settled for Janet’s family, her husband was able to find a loving, forever home for both Janet’s elderly horse, Amtrack and for Pasquale.

I will always hold my dear friend Janet in my heart and will always be grateful for the time I spent with her and her beloved animals — and for the gift of trust that Pasquale gave me.