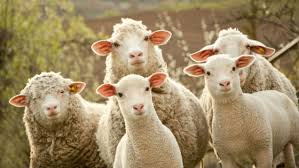 Years ago, when I first started to communicating with animals, some friends and I went to a big international horse show in Maryland. In addition to getting to watching horses and riders doing cross country jumping, stadium jumping and dressage there were also lots of vendors and demonstrations . . . including a demonstration of sheep herding with some extremely well trained border collies.

I love watching sheep dogs work! They are so focused and so obviously “in the moment” of their work — nothing distracts them. We watched fascinated as the handler put the collies and eight sheep through their paces. I find it amazing — the dogs so intent on their work and the sheep are putty in their paws.

At the end of the demo, the dog handler secured the sheep in a pen at one end of the huge field and took the dogs off the field. The handler then announced, “You’ve seen what the dogs can do — now let’s see what people can do!” He asked for volunteers to come on to the field to herd the sheep.

People started spreading themselves over the area of the field. Most of the human herders went to the far end and middle of the field. My friend and I were down near the pen, so we stayed there.

My friend opened the gate and the sheep were off! Clearly they knew the drill. They ran up to the other end of the field, followed the “wall” of human herders that were curved at the top of the field and started down toward the pen end of the field — but aiming for the opposite side of the field from where the pen was located. When they got to the opposite corner, they stopped.

There were very few people at that end of the field with me and my friend, who was by the pen. The sheep were about 15 feet away from me. I picked out the lead sheep and connected to her telepathically — she looked me right in the eye. I told her that she and the flock should follow me — she said OK. I turned my back on the sheep and started to run toward the pen — we were about 30 yards from the pen.

About half way to the pen I thought, “Either the sheep are right behind me or they are still standing there and I look like an idiot!” I stopped and turned around — the sheep were right behind me! The lead sheep looked me in the eye and said, “Why are we stopping?” I said, “Just follow me and run in the pen.” I turned back toward the pen and kept running! My friend opened the gate, the sheep ran in and my friend closed the gate. We’d done it!

The crowd went wild! When they finally quieted, there was a deafening silence from the sheep dog handler.

Finally he spoke, “That was the fastest that people have ever penned the sheep — but my dogs are still faster!”