Tanya and Jack: Friends At Last

Tanya and Jack: Friends At Last 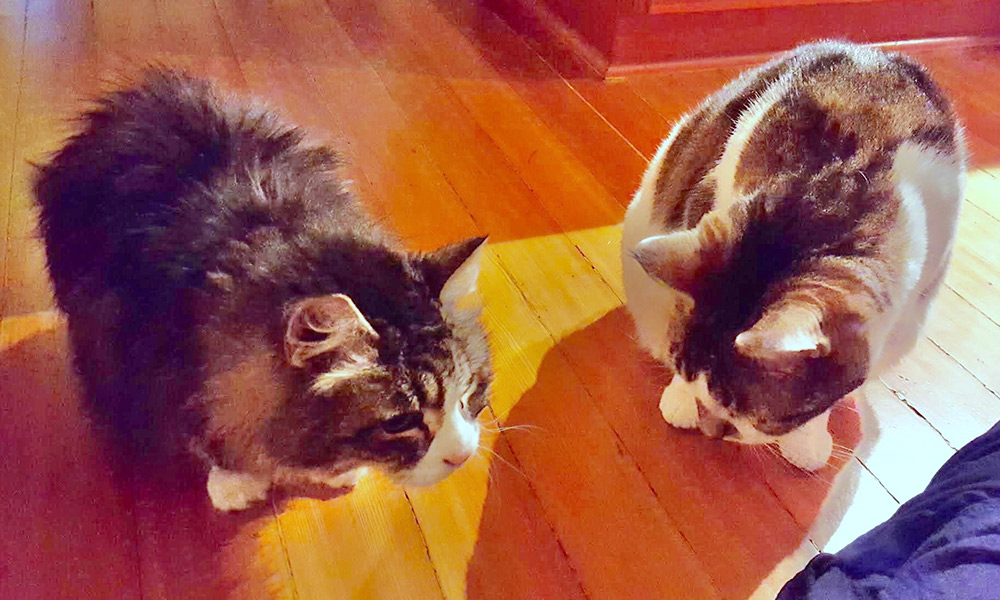 Joni contacted me about her cats in mid-November. One of their three cats, Cow Cat (who was white with black spots like a Holstein cow), had recently crossed to Spirit. Joni wanted to talk to Cow, but was most concerned about her other two cats — Jack and Tanya. Jack had been Cow’s special friend and he was not handling the loss of Cow well.

We talked to Jack first . . . his energy felt extremely stressed and depressed to me. Jack showed me that he felt that the “balance” in the house was gone. He felt he didn’t know what he was supposed to do. Cow had always been the leader, but now Cow was gone. Jack was trying hard “to be Cow” but it was not in his nature to be the leader. Jack felt immense pressure to take over Cow’s job as leader and it was creating a great deal of stress for him.

I assured Jack that he only needed to be himself. I asked Jack about what his normal role in the house was. He said he was the “lover” — he loved everyone and they loved him. He kept every one happy and he felt like he did this job very well. I assured Jack that if he could go back to doing that — loving his people and letting them love him — that this would help his people with their grief over the loss of Cow and it would help Jack too. Jack’s relief — at knowing he did not have to try to be Cow any more — was palpable.

I found it interesting during my conversation with Jack that he never mentioned Tanya. I asked him about Tanya — he said, “I think she hates me.” Jack showed me that Tanya completely ignored him and wouldn’t come near him. This was OK when Jack had his best friend, Cow — but now that Cow was in Spirit, it only made Jack feel more isolated and insecure. I asked Jack if he thought he would like to be friends with Tanya. Jack said he would but didn’t think Tanya wanted that, which made him feel sad.

My feeling was that Jack could use some distance energy work because he was so depressed and stressed. Joni thought this was a great idea — “anything that will help him!” I did a short distance energy work session while on the phone with Joni. I was guided to do Integrated Energy Therapy (IET), which releases emotional issues that get stuck in the physical body. I found that Jack needed release at the points for fear, stress, anger/resentment and distrust. I suggested that Joni see how Jack was doing over the next few days and that we could schedule more energy work if she felt it would be helpful.

Next we talked to Tanya. Tanya was the polar opposite of Jack. Tanya was very confident and self sufficient. Tanya showed me that she kept to herself and told me that she liked to be “near my people but not on them”. However, Tanya showed me that she did demand attention from her people when it suited her — but when she’d had enough attention, she was off on her own again. Joni confirmed that this was the case and that Tanya could be VERY demanding when she wanted attention. My feeling from Tanya was that she was very independent and liked to be admired — Tanya assured me that she was extremely beautiful — but liked to be admired from afar. She felt very superior to the other cats — very queenly. Joni laughed when I told her this, because she said it was a completely accurate description of Tanya!

I asked Tanya what she thought of Jack. She said that, of course it was sad that Cow was in Spirit now, but Jack “was a mess” about it. Tanya said she loved Cow, but not in the “clingy needy way that Jack did.” She seemed to have little sympathy for Jack’s feelings of loneliness, but my feeling was that she just didn’t know how to behave in a comforting and supportive way with Jack. I suggested to Tanya that she could really help Jack if she would just sit near him and not go off on her own so much. I told her that spending more time with her people would help them too. Tanya said that “maybe” she could try — but she didn’t seem very sincere about trying.

Finally we talked to Cow. Cow was very concerned about Jack — he said he tried to let Jack know he was OK in Spirit, tried to “visit” with Jack from Spirit, but he didn’t think he was getting through to Jack because Jack was so sad. I told Cow that we’d done some energy work with Jack and also talked to him about just being himself. Cow said he was so glad — he just wanted Jack to be happy again. I asked Cow if he could continue to visit with Jack and to send him love and support. Cow said he would because Jack was his friend and he loved Jack. Cow showed me that he would sit close to Jack and would tell Jack that everything was OK.

Before we closed the conversation, I told Jack that Cow had said he would visit and sit with him. I also told Jack that Tanya would try to be nicer to him too. Jack was thrilled to hear that Cow would be visiting — but was doubtful about Tanya being nice to him. I encouraged Jack to be open to the possibility of being friends with Tanya and he said he would.

I heard from Joni again a few days later. She said that after the first session Jack slept for a good part of the day — an indicator that he’d had good physical and mental release from the energy work and communication session. However, Jack was still not back to normal, although he was more relaxed and less apt to try “to be Cow”. Tanya was being VERY demanding of attention from her people. So we scheduled another session for communication with both cats and hopefully energy work for both cats as well.

When we talked to Jack, he said that Cow had been visiting with him which he really liked. He said that Tanya was still not being nice to him, though, which made him sad. I told him we’d be talking to Tanya again and Jack said he hoped she could be nice to him. Jack did say that he was aware that Cow had been visiting him from Spirit, which he found very comforting. I asked Jack if he would like more energy work — he could not say “yes” fast enough!

Jack needed more IET, as well as Reiki. I found that his energy was better than at the start of the first energy work session, but he still needed a lot of release and inputting of positive/healing energy. At the end of the session Jack showed me that he felt very relaxed and his energy felt “lighter” to me.

We talked to Tanya. She said she was paying a LOT more attention to her people, but they seemed to be upset. I told her that it was good that she was paying attention to her people, but that she needed to be more gentle about it. She had no idea what I was talking about! I showed her sitting/lying down near her people, rubbing and head butting them, letting them stoke her and just being close to them. She said she understood now — but the stroking couldn’t go on too long. I told her that was OK — when she was “done” she could just jump down or walk a little away. She said OK. Clearly, everything needed to be on Tanya’s terms!

I asked Tanya if she would like some energy work, explaining it in a way she could understand. She said, “No — I don’t need it!” I told her that was fine.

A few days later I got an update from Joni. She said that Jack was doing MUCH better — he was no longer depressed and was relaxed now. He was cuddling with Joni and her husband a lot, which they loved. Unfortunately, Tanya now seemed depressed. We scheduled another communication/distance energy work session a few days later.

I talked to Jack first. He felt like a completely different cat! His energy felt lighter and brighter to me — I felt very little stress and he felt quite happy! Jack wanted to know if it was OK that he was wanted extra cuddling from his people. I assure him that his people were happy to give him as much cuddling as he wanted. Jack was very happy to hear that! Jack was more than happy to get more energy work. Jack needed very little release, but I did input the positive energy that comes with IET and did more Reiki. Afterwards, Jack said his heart felt better — to me, he felt relaxed and happy.

I talked to Tanya. She felt depressed and sad to me — very different from the previous sessions. My feeling was that Tanya was finally feeling her feelings at the loss of Cow. Tanya said that everything had been “out of balance” since Cow crossed to Spirit. Tanya felt that her people had expectations of her — that they expected her to be Jack’s friend now, which was not something she felt she was good at. I told Tanya that no one wanted her to do anything that didn’t feel right to her. I told her that her people were giving Jack lots of cuddles and that was really helping Jack. I suggested again that she might feel better if she just hung around with Jack more — sitting near him to keep him company. I suggested that Tanya might find this as comforting as Jack would. Tanya said she thought that might be OK and I felt she was much more positive about following through this than she had been when I suggested it previously.

I asked Tanya if she would like some energy work, since it had helped Jack feel so much better. Tanya said, “OK — I’ll try it.” My feeling was that she was really wanting to feel better.

I did Tanya’s energy work. She definitely needed IET and Reiki and I found she needed release at the IET points for fear, stress, anger/resentment and heartache. During the energy work, I suggested to her that she could sit with Jack and that this would help both her and Jack. When I checked in with Tanya after the energy work, her energy felt much lighter to me. She said, “That was really nice!” She seemed surprised to find that she really liked the energy work.

I had a report back from Joni a couple days later. Jack was back to his normal happy, loving self. Amazingly, Joni said, “Tanya was a completely different cat!” Tanya was spending a lot of time with Jack and was being very affectionate — even “kissing” Jack and playing with him!

We had a few more chats and energy work sessions, but both Jack and Tanya never looked back and they continue to be good friends. Balance has been restored in Joni’s house!

“Tanya really seems to really like Jack now and visa versa. They eat together, share the same places in our home and truly seem happy to keep each other company. They even play together! Jack will ‘swat’ Tanya and she will meow and run away — but with in a minute, she’s back for more. Jack will even share his food with Tanya. This is a true miracle!” — Joni M., MT.